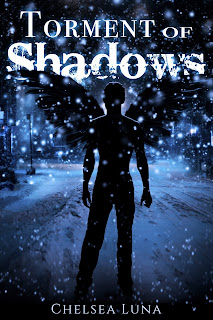 
There’s something wrong with Sophie Miller. She’s seventeen and the only surviving member of her family. It’s a struggle to keep afloat in New York City as a senior in high school and a fulltime waitress. Sophie’s entire existence is miserable, right down to the abusive ex-boyfriend who’s stalking her. As if her life couldn’t get any worse, the shadows have returned. Whispers float in the wind and figures slither in the darkness. Evil, real malevolent evil, has returned after two long years of reprieve. Sophie thinks she’s going crazy. Maybe she is—what else could explain what she’s seeing, hearing and dreaming? After two thousand years of roaming the Earth, Luke Cervelli knows better than to get involved in the politics of Heaven and Hell, but when he’s brazenly attacked by a demon on the streets of Manhattan, he knows something is terribly wrong. He doesn’t understand how wrong until he stumbles across a beautiful girl named Sophie—a beautiful girl with a hellish secret. Something big is brewing between Heaven and Hell, the likes of which Luke has never seen, and he has a feeling that Sophie Miller has something to do with it.